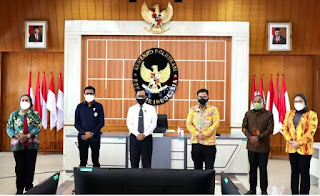 The government still displays the commitment to build a safe and prosperous Papua. The Political, Legal, and Security Affairs Coordinating Minister Mahfud MD affirms the country's commitment in a meeting with the West Papua Regional Legislative Council (DPRPB) in Jakarta on Wednesday, 30 June.

Minister Mahfud said the government continues to promote dialogue with people's representatives and community leaders. “So, we focus on welfare which can be achieved through security,” said Minister Mahfud.

In the meeting, the DPRPB Speaker Orgenes Wonggor on behalf of all Papuans and the Special Committee on Papua stated his commitment to the Unitary State of the Republic of Indonesia.

Mr. Orgenes Wonggor then conveyed his view on the future development of Papua, especially on the amendment of Law Number 21 of 2001 on Special Autonomy of Papua.

In response, Mahfud MD underlined that he will continue to monitor and follow up the inputs regarding the better future of Papua.

“We receive 14 inputs. Several inputs will be studied and several others are already included in the draft law. The others may be listed in technical implementation,” he concluded.